“This is the spot,” Consumers Power CEO Roman Gillen said, as he stood a massive fir tree that had fallen across an access point on North Fork Road in the Santiam Canyon. “This spot tells our story.”

The roar of a chainsaw echoed through the canyon, as a resident who returned to their home after the deadly Beachie Creek wildfire cut their way onto their property.

Gillen was on the tree for a reason.

In the aftermath of the Labor Day fires that devastated vast swaths of Western Oregon, the Federal Emergency Management Agency announced Administrator Pete Gaynor was traveling to the state. FEMA officials asked if Gillen, the leader of a 23,000-meter electric co-op, would conduct a short briefing during Gaynor’s tour of the area.

Gillen immediately accepted the invitation, knowing it would be a good opportunity to discuss the co-op’s rapid response to the wildfire and the challenges of rebuilding a system that lost millions of dollars of infrastructure in the blaze. Gillen was also aware that a meeting with a high- profile administration official required a degree of flexibility—and it did.

The date and time of the meeting shifted several times—not uncommon for a federal official in demand. But the time and place for a 30-minute meeting was finally set for Sunday, October 4, in the small town of Lyons, 25 miles east of Salem.

There was also a last-minute twist. Instead of a small group meeting with Gaynor and his team, the administrator would be accompanied by most of the Oregon congressional delegation, along with several other state and local officials.

Gillen appreciated the extra attention, but it presented logistical challenges in the narrow, twisting canyon. Gillen, Member Services Manager James Ramseyer, and Operations Manager Billy Terry settled on a location that epitomized CPI’s territory: rugged, with steep, treacherous hillsides with a narrow dirt road they hoped could accommodate the convoy headed its way from Salem.

Gillen and his team headed back to the rendezvous spot at the Oregon Department of Forestry, with the road a heartbreaking scene of incinerated homes and husks of burned-out cars. When they arrived at the ODF parking lot, they unexpectedly found a large group of officials already waiting. Gaynor was en route with another large group. It was clear to the CPI team that the original plan needed to be revised. There were now simply too many vehicles to stack into the canyon.

Alerting FEMA officials of the situation, they devised Plan B as a long line of cars arrived minutes later from Highway 22.

In addition to Gaynor, the group included U.S. Sens. Ron Wyden and Jeff Merkley and U.S. Rep. Peter DeFazio, along with other state and county officials.

Picking a shaded area in the corner of the parking lot, Gillen traded in his fir tree for a large rock and welcomed the dignitaries, especially Gaynor.

“We really appreciate your personal attention in coming from Washington, D.C.,” Gillen said. “We need your help.”

While the venue lacked the charred landscape of their original site, it did provide a sweeping view of how CPI crews, led by Terry, built a new electric system in the area virtually overnight. 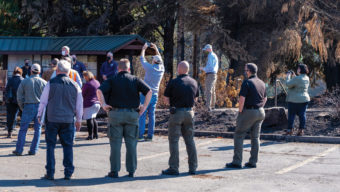 “This is nothing short of a miracle,’’ Gillen said, listing the other Oregon electric cooperatives that had immediately sent crews to assist.

Gaynor and the elected officials listened intently as Gillen made clear that because of safety and reliability needs, the miracle power lines would be temporary. They would need to be undergrounded, and the federal government would play a critical role.

“It’s going to be a long, difficult road to get these lines underground,” Gillen said, adding it would be an expensive project requiring FEMA’s assistance. “We will spend the money wisely. That’s what co-ops do. We’re good at it.”

This statement led to a constructive, socially distanced discussion between the congressional delegation and Gaynor on FEMA’s ability to fund these projects—a substantive exchange that would have been difficult if they were deep in the canyon, pressed for time. But soon their time was up, and the group loaded in their vehicles for their next stop.

The venue had not been planned, but for the CPI team, the discussion and the new relationships more than made up for it. Gillen had told their story, and that was all he could hope for.

“I hope it makes a difference,” Gillen said, waving at Gaynor as he headed up the highway, on a journey to more devastation and heartbreak.