As energy experts attempt to unwind why the Texas electric February—contributing to the death of 151 people—a clearer picture is coming into focus on how the Pacific Northwest managed to avoid similar cataclysm during the region’s ice storm.

A recent assessment by the Bonneville Power Administration concluded the four lower Snake River dams played a crucial— and until now, an unheralded—role during the deep freeze of early 2021.

According to the BPA assessment, the four Snake River facilities not only provided important real-time electricity and critical power reserves, but also picked up slack when there was an equipment failure at Chief Joseph Dam—one of the largest dams in the Columbia River power system.

“Year after year, the Pacific Northwest can count on service from these projects in the winter when electricity consumption is highest,” said BPA Administrator John Hairston. “As we feel the impacts of climate change and the region builds more intermittent energy resources like wind and solar, we’re seeing more evidence that these dispatchable hydroelectric facilities are vital to public safety and electric reliability for the region.”

While federal agencies operate the 31 dams of the Federal Columbia River Power System as a whole, this more granular data is helpful for power planners evaluating the potential impacts of climate change, including extreme-cold weather scenarios and how the federal system can respond.

As Northwest residents turned up thermostats to keep warm and businesses maintained operations during the February storm, the four dams on the lower Snake River revved up on numerous occasions to meet the demand.

In addition to generating more than 1,700 megawatts of electricity at times, these facilities accounted for important backup reserves when other hydro units experienced unplanned outages.

These reserves played an important role during the winter storm that battered parts of the Pacific Northwest in February, including electric cooperative territory in the Willamette Valley.

During that storm, technical issues at Chief Joseph Dam on the upper Columbia River impacted generation at the facility. Some of the electricity production and reserve requirements were transferred to the four lower Snake River dams, which are equipped to provide valuable operational agility and flexibility.

Operators were able to bring the lower Snake River dams’ energy production to zero at night, when power demand dropped, then quickly ramped up their production during the day.

“Knowing we can rely on these facilities for steady energy production under normal circumstances should bring great comfort and confidence to residents of the Pacific Northwest,” said Kieran Connolly, BPA Power Services vice president of generation asset management. “Being able to rely on their operational flexibility during extreme weather truly demonstrates the value they provide to the region.”

The assessment also charted the flexibility of the hydroelectric plants on the lower Snake River in January and February. At times, each plant eclipsed 400 megawatts (MW) of production, with some providing more than 500 MW of electricity.

BPA noted hydropower is more flexible and can ramp up and down more quickly than even the most flexible natural gas plants. On an average annual basis, the plants on the lower Snake River provide about 1,000 average MW of electricity, which is about the annual consumption of Seattle.

While it is clear the lower Snake River dams helped keep the Northwest from being another Texas, perhaps the least surprised at the news are the electric cooperative leaders who took the brunt of the February ice storm. 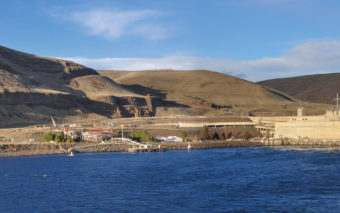 “Throughout the ice storm, we had numerous members without power,” said Salem Electric General Manager Tony Schacher. “It never crossed my mind that when we were ready to energize, the power wouldn’t be there. It’s clear the lower Snake River dams made an immeasurable impact on our ability to put our system back together and confidently return service to our members.”

Consumers Power Inc. CEO Roman Gillen believes the role of the lower Snake River dams in crisis situations should give pause to policymakers who are considering breaching these facilities.

“Events like this year’s ice storm really make me thankful for the flexible federal hydro system that makes our power supply so reliable,” he said. “Unfortunately, that is not the case in other parts of the country.”

BPA is reportedly working on an assessment that highlights the lower Snake River dams during the record-setting temperatures in June.

Gillen says the workhorse nature of the Snake River dams makes them invaluable during extreme weather events, which are becoming more commonplace.

“Time and time again, hydro demonstrates why it’s the king of resources,” he said.