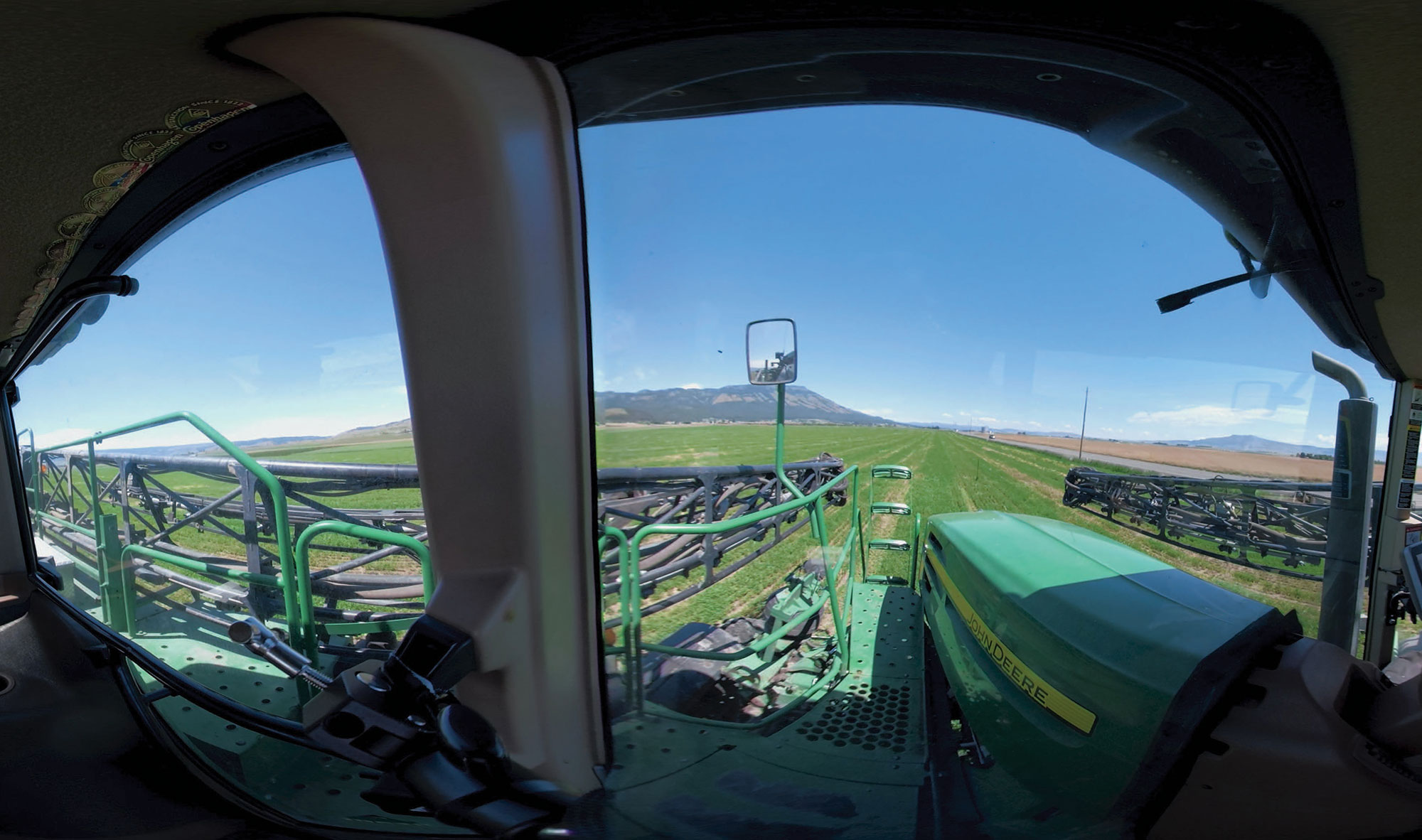 Oregon Trail Electric Cooperative in Baker City continues to use the newest technology to educate communities on how to safely coexist with power lines.

OTEC has finished seven virtual reality videos. Two are focused on safety. The first educates viewers on the proper procedures in case of a downed power line, such as a vehicle striking a pole. The second centers on the importance of agriculture safety around power lines.

The other videos focus on tourism and economic development throughout Eastern Oregon, highlighting outdoor recreation and destinations such as Anthony Lakes Mountain Resort and Copper Belt Winery in Baker County, and the Union County Farm Loop.

Golden Shovel Agency filmed the agriculture safety video on a farm in Union County owned by Austin and Jeana Bingaman. Austin is a farmer and OTEC board member.

This virtual reality approach follows OTEC’s commitment to sharing safety tips through radio, print, and other media platforms. Virtual reality is the newest addition to the safety campaign and allows viewers to take an active role in learning about electrical safety.

Using the immersive technology of the virtual reality 360-degree video engages the viewer like no other media format. When participants put on a headset, they can look up, down, and 360 degrees around the scene while they listen to the safety message.

“The virtual reality is taking it a step further,” Gettle says.

Golden Shovel produced the video, which was sponsored by Federated Rural Electric Insurance.

“The video will be used both locally with our member-owners and nationally,” Gettle says.

The launch of the video was planned for a safety conference in Florida this spring, but the trip was postponed due to the coronavirus pandemic.

The downed power line video will be available to cooperatives across the country. Gettle says OTEC is the first electric company to use virtual reality to share safety messages with the public.

“We’re doing it to protect everyone,” she says.

The safety videos can be downloaded to play on a virtual-reality headset, but a headset is not required. To access the videos on a computer, go to OTEC’s website and navigate to the “safety” tab. While watching on a computer, viewers can use the mouse or arrow keys to experience the scene 360 degrees in nearly every direction.

“Virtual reality makes your brain think that you’re really in a new place,” says Aaron Brossoit, CEO of Golden Shovel. “The result of this increased brain activity is that the viewer understands the message and remembers it. Retention of information is so important for training. If you can’t remember it, you can’t use what you’ve learned.”

OTEC owns 20 virtual reality headsets, which will be used for hands-on training.

After pandemic restrictions are eased, VR headsets will be available in OTEC office lobbies for customers to watch the videos.

Bingaman volunteered the use of his field and equipment to film the agriculture safety video in June 2019 between cutting hay and harvesting grass seed.

“It was pretty neat,” he says of the process, which took about six hours to film. “I hadn’t thought about using virtual reality for a safety video.”

Working around electricity is a real part of his day, Bingaman says, with power lines along the county roads where he accesses fields. Electricity also powers the pumps and pivots that irrigate his crops.

“We have power lines surrounding our fields,” he says. “We’re working around lines all the time.”

This means a reminder about electrical safety is always a good idea.

“We can get complacent and forget to look up,” he says

The safety video notes that technological advances have eased some labor associated with farming, but that working around energized power lines is still a risk.

“One thing that hasn’t changed is that farming can be dangerous, especially where electricity is concerned, if you fail to plan the work,” the narrator says.

Farmworkers are encouraged to conduct a safety tailboard or hazard assessment prior to working so everyone involved knows the placement of power lines and how to safely work around hazards.

OTEC’s safety advice is to stay at least 50 feet between a farm implement and a power line, which may require spotters to alert the equipment operator.

Those who must work alone are encouraged to assess all potential electric hazards prior to starting work.

“Look up and note the power lines,” the narrator explains. “Look around for poles, not only on the edge of fields but in the interior.”

The video also covers the proper procedure in the event a power line falls across a piece of equipment. If caught inside, a worker should stay in the cab until assistance arrives. If the line causes a fire, the operator can jump clear of the equipment, landing with both feet together, and then hopping with feet still together until at least 50 feet away.

While irrigating, the video advises, locate electrical hazards prior to work and keep equipment and metal pipe at least 50 feet away from power lines. When assessing overspray of a sprinkler system, be sure it will not hit a power line.

The video ends with powerful, simple advice. “Remember: Look up to live.”

Corey Parr, vice president of safety and loss prevention at Federated Rural Electric Insurance, sees the advantage of using virtual reality for safety training because it mimics being in the middle of the action.

“You can look over the whole facility and better see the hazards,” he says.

To access the videos, go to OTEC’s website. Choose the “safety” tab and click on “safety first.” Videos can be downloaded to a virtual reality headset or watched on a computer.