Most people associate scholarships with high school graduation and higher education. However, for several electric cooperatives, scholarships are awarded much sooner—to some, within days of birth.

“The first scholarship to our members,” is how Lea Hoover, Oregon Trail Electric Cooperative’s (OTEC’s) senior manager of administration, refers to the free books provided each month to children ages 0-5 in Baker, Grant, Harney, and Union counties, courtesy of the co-op and Dolly Parton’s Imagination Library.

OTEC launched its Imagination Library program in 2019 with the leadership of its board, numerous community partners, and a 50% grant match from the James and Shirley Rippey Family Foundation.

The program is available to children in the four Eastern Oregon counties OTEC serves, making the co-op the first in the country to take a leading role in bringing Imagination Library to its service area.

“We were looking for ways to reach= children in our territory,” Hoover said. “When the opportunity to launch Dolly Parton’s Imagination Library came up, it made perfect sense for the cooperative to take the lead role in getting books into the hands of families throughout our territory.”

Partnering with local hospitals, OTEC gifts every newborn baby a book, along with information to sign up for the program. Anyone with a child up to 5 years old in their home is eligible to register for the program.

“Marketing can be one of the most daunting parts of launching the program, but the resources directly from Dollywood Foundation and from Touchstone Energy make it easier,” Hoover said. “One key to success is the involvement of community partners. We partner with over 60 organizations who help spread the word and sign up children for the program, highlighting our shared missions and the power of the cooperative network.”

OTEC markets the program every chance it gets, whether it be handing out cards with candy at parades or at community event booths.

Hoover noted OTEC’s Imagination Library has garnered support from its membership and has provided an opportunity for the co-op to show members how the co-op lives up to its mission of “bettering the economy and lives of their members.”

Jan Rippey, associate member of Wilsonville Public Library and an Imagination Library advocate, worked closely with OTEC on its program.

“Like true pioneers that many of us Oregonians are, OTEC blazed a trail when they created an ingenious partnership with The Dollywood Foundation,” Rippey said. “Just as OTEC envisioned, Imagination Library is engaging their community in an inclusive education-focused project that fits their mission. It’s a perfect partnership.”

Looking to the future, OTEC has set a lofty goal of reaching a 100% participation rate among its members. Nationally, OTEC would like to see co-ops recognized as the conduit of choice for community programs such as Dolly Parton’s Imagination Library.

Statewide, other electric co-ops are joining Dolly Parton’s Imagination Library and are considering the partnership.

Coos-Curry Electric, headquartered in Port Orford, has a growing program with more than 280 children enrolled, just more than 28% of the eligible population.

“In the upcoming year, we intend to expand the program and put more books into the hands of children,” said Coos- Curry Communications Specialist Kelsey Bozeman. “Our program has jumped 5% over the last three months. With this forward momentum, we are hoping to increase enrollment to over 35% of young children in the next year.”

Eugene-based Lane Electric Cooperative has partnered with several local foundations to provide books to children in the rural areas it serves, and has plans to grow the program.

The literacy partnership is a natural progression for co-ops that were formed to help bring rural America out of the dark ages in the 1930s. 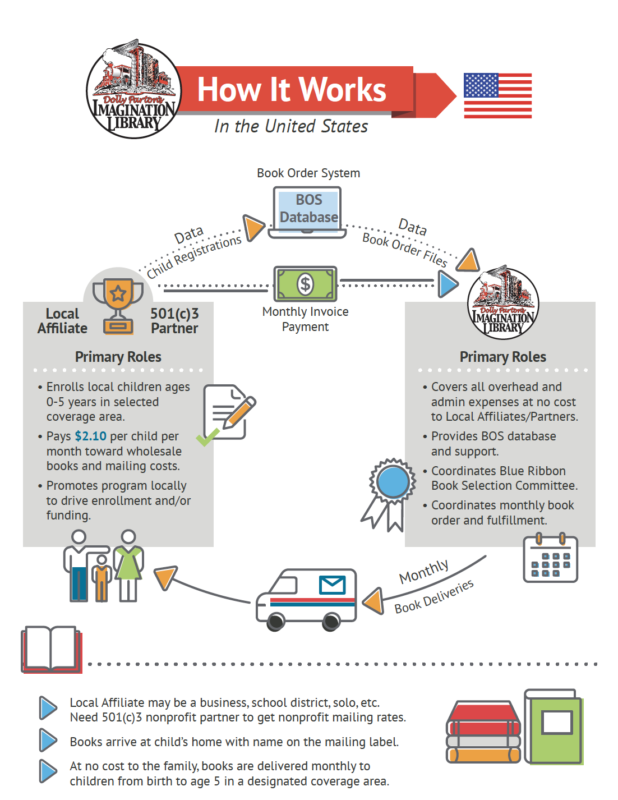 Inspired by her father’s inability to read or write, Dolly Parton founded Dolly Parton’s Imagination Library in 1995. It began as a local effort in Dolly’s hometown of Locust Ridge, Tennessee, to inspire the love of learning and reading from a young age.

Each child registered in the program receives one free, age-appropriate book each month until their fifth birthday. More than 1,750 books were sent out in the first book order.

Today, more than 172 million books have been distributed to children in five countries through Dolly Parton’s Imagination Library, and the program continues to grow.